Rhizobacteria are root-colonizing bacteria that form symbiotic relationships with many plants. The name comes from the Greek rhiza, meaning root. Though parasitic varieties of rhizobacteria exist, the term usually refers to bacteria that form a relationship beneficial for both parties, and is therefore synonymous for plant-growth promoting rhizobacteria (PGPR). Many rhizobacteria are able to control plant diseases that are caused by other bacteria and fungi through, among others, the production of secondary metabolites such as cyclic lipodepsipeptides. Root exudates influence biomass growth but also the production of secondary metabolites. This means that e.g. CLP production can be influenced both qualitatively and quantitatively by such nutritional factors. However, evidence for efficient in situ production of CLPs by Pseudomonas and Bacillus growing on roots has only been occasionally documented. Furthermore, it appears that a different set of CLPs may be activated in a strain-specific way and depending on the interacting fungal challenger. However, in general, information on the influence of exudates and other factors inherent to the rhizosphere lifestyle on CLP synthesis by Pseudomonas and Bacillus remains fragmental and evidence for CLP production in planta under natural 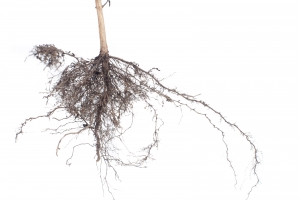