The general total chemical synthesis strategy (figure 1 and 2) that will be applied for generation of CLiPs starts with solid-phase peptide synthesis (SPPS) to produce the linear peptide precursor. Here, viscosin will be used to explain the synthesis strategy. First, an amino acid residue is attached to the solid support via its side chain (1). This amino acid requires a nucleophilic side chain functionality and should be as close to the C-terminus as possible without being involved in esterbond formation. Therefore, D-Ser8 is selected as the initial amino acid and introduced using a Fmoc-D-Ser(OH)-OAllyl building block. Due to orthogonality between the Fmoc- and Allyl-approaches, the C-terminus of serine remains unaltered during elongation of the oligopeptide chain and, consequently, available for ring-closure following allyl group removal. Thereafter, assembly of the amino acid sequence is performed by an automated solid phase peptide synthesizer using the ubiquitous Fmoc/t-Bu protection strategy followed by introduction of the characteristic 3-hydroxy fatty acid tail (3-OH C10:0), also on solid support (2). Afterwards, the unprotected hydroxyl functionality in the side chain of threonine at position 3 can be used for esterbond formation. After esterification of Alloc-L-Ile, the linear peptide precursor is obtained (3). Since amide bond formation generally proceeds more smoothly compared to formation of the esterbond in this peptide context, the decision to perform on-resin esterification of L-isoleucine before cyclization was deliberate. The next step is All/Alloc-deprotection and subsequent on-resin cyclization. Final cleavage from the resin under acidic conditions generates the desired viscosin (4).

The use of the total chemical synthesis strategy for the production of CLiPs has multiple advantages. Due to the amino acid flexibility during the solid phase peptide synthesis, it allows the synthesis of various viscosin analogues, other natural CLiPs and special analogues or (fluorescent) probes that would otherwise not occur in nature. The amino acid that undergoes esterification can be varied as well.

So, in theory, all amino acids in the oligopeptide chain, the fatty acid tail and the chain length could be changed easily, provided that there is a trifunctional amino acid present between the 2 amino acids involved in esterbond formation. And of course, the need for a hydroxyl functionality to form the esterbond, limits the choice to threonine, serine ( or tyrosine). 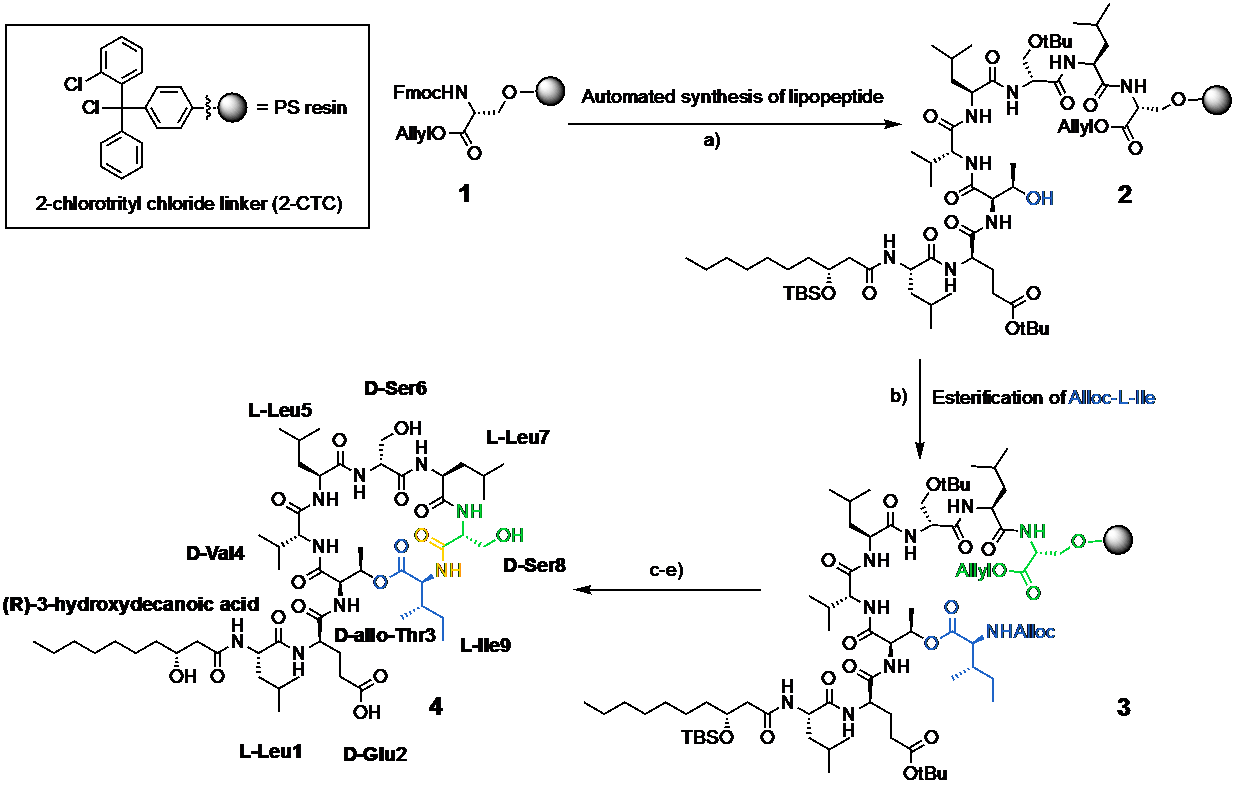